It is no secret that there has been a growing, and necesary, push to bring more females into tech. I was asked a few months ago if I would be interested in teaching an intro to iOS class for woman at Lamp Post Group. It would be a six week course that met two hours every Wednesday. I jumped at this opprotunity. I’ve given lectures and pitches before, but never taught a class so I figured this would be an amazing opprotunity to:

a) contribute something positivie to the local femal tech community

When I talked with the program director at LPG I learned of my most exciting challenge yet…the diverse background of my students. This included not only age, but the level of prior experience in any development. I couldn’t wait to get started.

Develop and Teach with a Purpose

The most memorable classes I had in college were always the one’s where my professors had passion for the subject(s) they were teaching. It shouldn’t be a surprise to anyone that those were the classes that I excelled in. My computer science and M.I.S. classes I took I was average in because of the lack of enthusiasm from my teachers.

One of my primary goals was to make sure that my students knew that I was passionate about iOS development and that they had my full attention. I was there for them.

The next step was to outline a curriculum that I could present to the class. This was tougher than I had anticipated. Most of the intro classes that I have seen or been in always position themselves as “by the end of the class or workshop you will have built an app”. I personally think this does a disservice to the attendees. My reasoning for feeling this way is that if you break down the various components it takes to actually create an app, the coding portion is but a fraction. What about the actual submission process, Xcode, design patterns, language features, etc? These are all very important concepts that are too often skipped.

This would not be the case in my class. At the end of the class I wanted the women to have the necessary foundation to carry on with their future careers.

At the beginning of the first class I told everyone that our curriculum wasn’t going to be written in stone. Granted, I had curriculum outlined, but it was important that we move at the pace of the class, thus the topics covered could / would be adapted.

In retrospect this was the best decision I made.

PowerPoint was always the bane of my existence in college and early in my career. Keynote was a much welcome alternative, but I probably use less than 1% of its power. I don’t use animated transitions or fancy slide layouts. I keep each slide to a topic or sub topic and engage my students. There is nothing worse than having a presenter read verbatim from their presentation.

Deckset was the perfection solution. Creating presentations using markup was right up my alley. I can’t endorse this product enough.

I’ve been writing software for the past 18 years and iOS apps since the initial SDK. Teaching this class has been without a doubt my greatest challenge and reward. Truth be told, I was always nervous each passing week if people would return or was scaring away future developers, but each week the classroom was full and the questions were more intriguing.

Over the six weeks I think I learned just as much as my students did.

During our last class I asked if anyone had any final thoughts or questions before we signed off. The question shared amongst the majority of the class was, “Where do we go if we want to learn more?”. A huge smile came over my face and I felt that I was successful in teaching the class. I knew that I wasn’t going to be able to cover every topic that I wanted to nor would everyone “get it” at the end, but my goal was to inspire them to keep learning.

The advice I gave them to becoming successful developers… 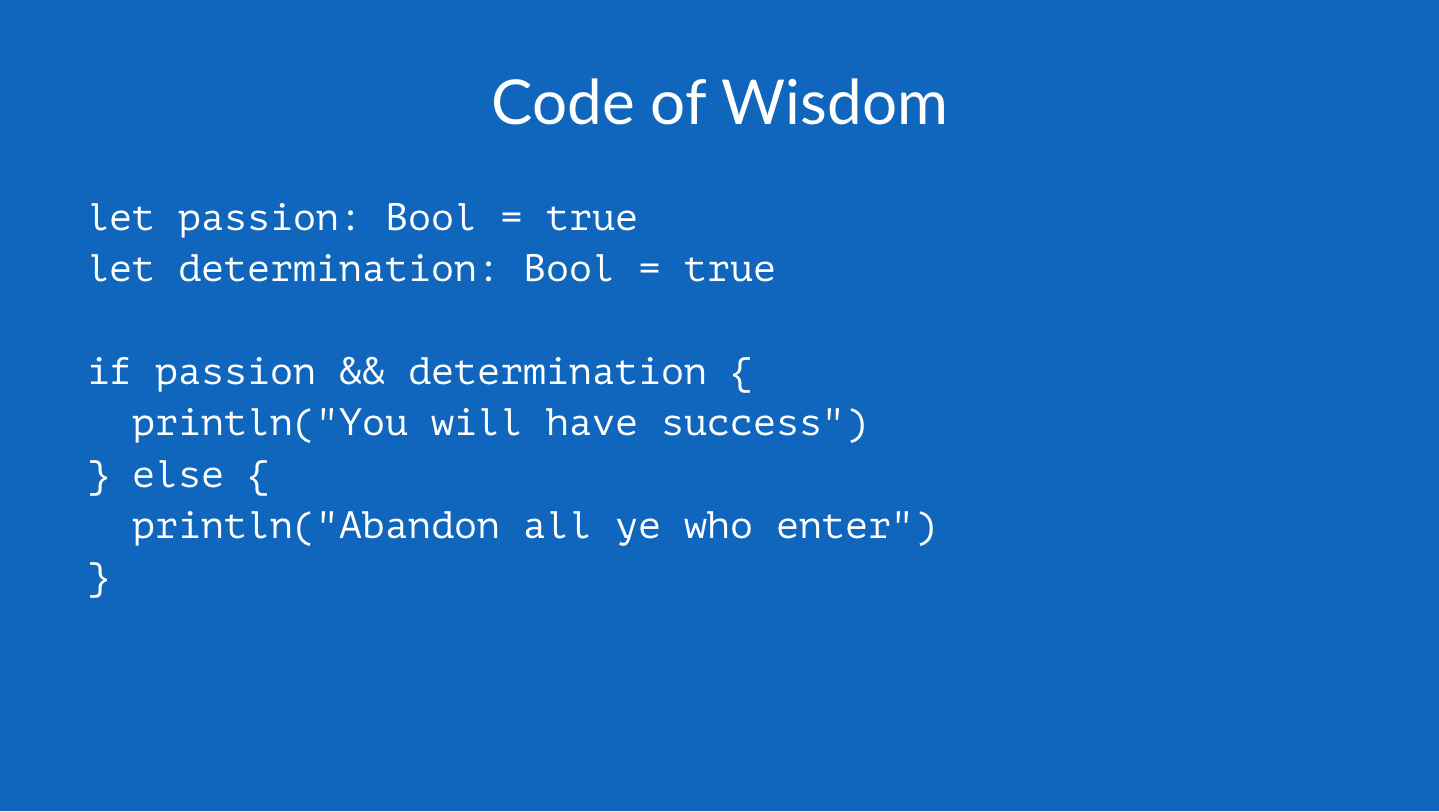 All of my desks and samples are on Github.