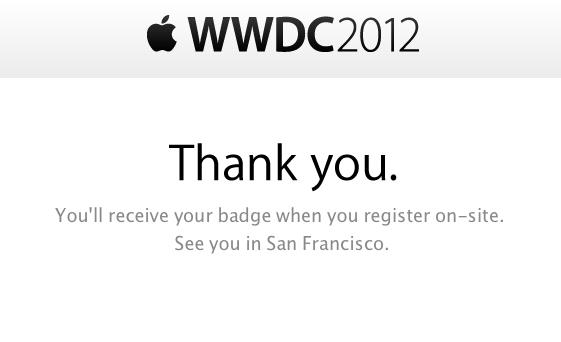 Why is the WWDC better than Christmas??? Because it lasts for a freakin’ week, major product announcements, hardware AND software are inevitably revealed and as a developer and attendee I get first crack at all the new stuff…not to mention being surrounded by the best/friendliest individuals in the world.

My first WWDC I attended was back in 2009. I had been developing iOS for a little while, but was still new to the platform, Objective-C and CocoaTouch. When I was there I did everything that I could to attend every session that even slightly interested me. After I was done for the day I would take my notes and laptop back to the hotel, woof down some food, try and review the firehose of information I had received that day, do a little bit of coding and then get some sleep and repeat. By Friday I was more exhausted than I had ever been and decided to just explore the city with my wife and 9 month old daughter (at the time). It was a welcome mental break. Since that conference I have never been to anything else that could rival WWDC’s production, the camaraderie between Apple and the attendees and the sheer atmosphere of what makes Apple such an amazing company.

This Sunday I will head out west for another grand week long adventure. I expect the conference to exceed all my expectations. I also plan on taking a different approach to my week’s activities. Last time I tried to do EVERYTHING. This time I am being very selective as to the sessions I attend. Apple will post the session videos to the public shortly afterwards so I’ll just catch up when I return. One of my most important goals is to spend much more time in their labs. As to get the most out of labs I’m prepping two different applications with specific functionality to discuss with the engineers. Lastly, and almost as important as the development and learning portions of the week, is to socialize more. There are handful of developers and companies that I converse, help, admire or who have helped me in numerous ways that I making sure I get to meet in person and probably by them a drink or two. They deserve it.